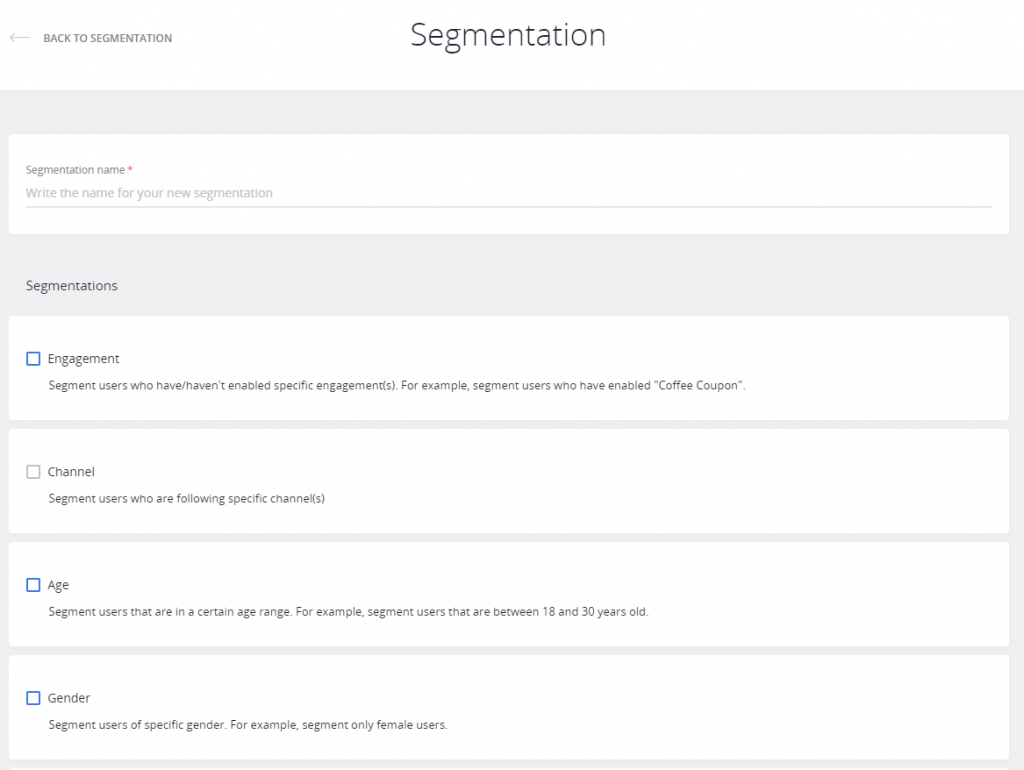 Use this section to target users who had or had not activated specific engagements.

Example: target users who have never activated coupon “Free 1GB” that they have received once they followed your channel.

Channel (available to your Partners)

This field can be used to target end-users who have or haven’t followed your second channel. You can also target users based on how long they have followed a specific channel.

Example: target users who are following your channel for more than a year to give them a free coupon.

Notice: as a Tenant, you cannot use this segment- your channels are followed by default.

Target end-users based on their age.

Example: target users who are between 18 and 35 years old.

Notice: this segment will work only for the end-users for which we have the age parameter known.

Target end-users based on their gender.

Example: target female users and send them a free coupon on Mothers’ day.

Notice: this segment will work only for the end-users for which we have a gender parameter known.

Target end-users who currently have less, exact or more than a certain amount of points in your loyalty programs.

Example: segment end-users who currently have more than 1.000 points in Points Loyalty.

Target end-users who have accumulated in a total time of loyalty – less, equal or more than a certain amount of points in your loyalty programs.

Example: segment end-users who currently have more than 10.000 points in Gamification Loyalty.

Target end-users from your gamification and advanced loyalties based on their current level status.

Notice 1: first you must select loyalty and then you will have an option to choose levels. You can select only one loyalty.

Notice 2: to segment end users from one level you will have to select the same level in both “from” and “to” sections.

The list should have only end-users’ numbers, one number per line, not separated by commas.

Once you upload your list, we will check how many of those users are following your channels.

Notice: You won’t be able to trackback which one of your end-users is following your channel, but you will see the number of total followings.

Tip: Use this segmentation if you are planning to broadcast message to all application end users that have a history with your brand (had purchased at your shop before, have registered on your website, etc.).